Anyone here kept one long term? I picked up a purple tip aussie specimine this weekend. Just wondering what some of your guys experience with them is. I've read they can be easy or extremely difficult. The aussie specimines are supposed to be hardier.

I had a couple a long time ago. As far as I know, they thrive in "dirty" water. Meaning they like a lot to eat, and less than pristine water conditions to survive long term. I have had one friend that has been able to keep them for a few years and propagate them a couple times. Though, I like the way they look, I just don't think I would want to get one.

Quote:
Originally Posted by SnakeBlitz33 http:///t/396300/catalaphyllia-jardinei-elegance#post_3530660
I had a couple a long time ago. As far as I know, they thrive in "dirty" water. Meaning they like a lot to eat, and less than pristine water conditions to survive long term. I have had one friend that has been able to keep them for a few years and propagate them a couple times. Though, I like the way they look, I just don't think I would want to get one.

If you don't mind me asking how was your experience with them? Do you remember by chance what area they originated from? They have colored tips?

From what I'm understanding the Catalaphyllia Jardinei can be found in a wide range of locations and varying conditions. From what I've been reading there came a point in time when the hobby had became saturated with a number of these specimens effected by what is still to my understanding an unknown disease that appear to effect only this type of coral.

In an article from Reef Keeping Mag http://reefkeeping.com/issues/2008-01/eb/index.php about a study a few years back there was a claim about a pathogen that is believed to be water born and can infect other Catalaphyllia without having to have direct physical contact.

Apparently this mystery disease they are calling Elegance Coral Syndrom (ECS) appeared to be linked to specimens coming out of Jakarta who were and might still be the main supplier of these coral to the United States.

Suggestions about elegance corals found in shallower waters around run off locations that could be picking up certain pathogens and thriving in dirty water.

The purple tipped specimen that I've acquired comes from deep water (40m) off the north coast of Australia. Lower light, lower nutrient rich waters. Australia doesn't import corals from anywhere else like we do they actually have a law against it. Their stock has not been known to come into this country effected with ECS.

So far I haven't seen the signs of the so called syndrome (knock on wood) but my specimen does seem to be a bit wilted from the 400w halides they were being kept under for a few days before I picked it up. It isn't bleached but the tentacles are shrunken in a bit. It's been slowly opening up and looking better the last 2 days. I did see it snatch a piece of mysis. Fingers crossed.

Mine were from jakarta to my knowledge. I was importing them from a california based company. My friend who had success for a few years had an aussie elegance.
My experience with them was fair at best. While a couple did die, the third didnt die, but it never formed additional heads either. Ended up selling it

If you got an Aussie Elegance, then you stand a much better chance of success as they are much hardier than the Jakarta specimens. Naturally, this tends to reflect in the price as well. As is often the experience, you get what you pay for...

Well this one never made it guys. It wasn't in great condition when I got it so it wasn't a big surprise.

I told my self I wouldn't get another. But I'm stubborn so I didn't listen.

This time I have a little more experience behind me, a little more knowledge, a stable system and what appears to be by all rights, a healthy, aqua cultured specimen.

I'm sure I'm not the only one to ever talk myself into it by saying something like that. But the beauty has seduced me once again.

If I fail then it's just not meant to be and I will eagerly await the "I told you so's". But if she lives...if she lives...the beauty will be all mine. 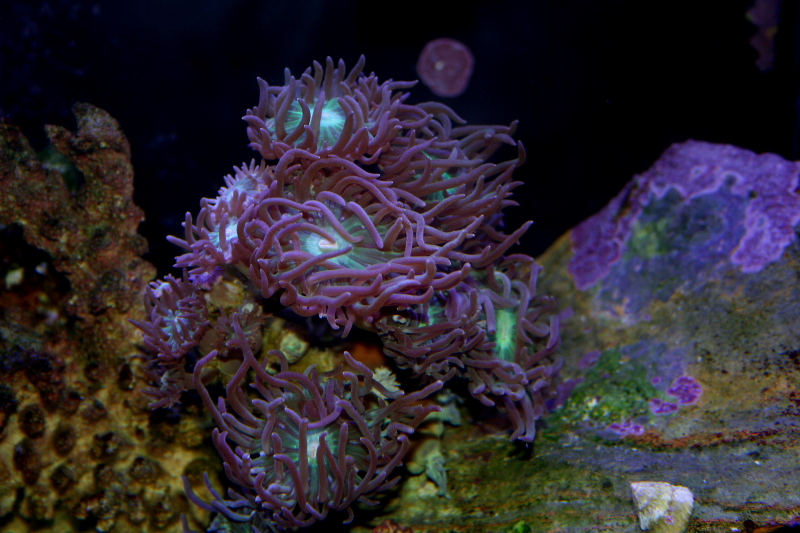 what kind of flow do you have passing over it.BTW ever look into a Duncan. I found mine much easier to keep then an elegance
Last edited: Nov 5, 2016

That is a beautiful Duncan. I do have a frag that has now gone from 2 to 3 heads. But I haven't come across a piece here locally with quite that color. it is nice.

Day 1: Is opening up pretty good. I've counted a total of 9 mouths. I did hit it with a little coral food and it is showing response by reaching for the feeder tube.

Currently acclimating in the shade and a low flow area. I figure I'll slowly bring it out more towards the front of the tank soon.

beautiful rock-work my friend FYI my LFS has a Australian elegance that they have had for a while an keep it in a high flow area and constantly add Marine snow.Is that a Niger trigger in the back ?

Niger, yes. Been a awesome addition too. Probably one of my favorites I've owned thus far.

Agreed, I've seen a number of situations where they appear to do well in good flow. I have to keep the mp40's on low setting most of the time. Between them and the return flow I get quite a bit of water movement. Didn't want to shock the elegance.

She still seems to be opening more and more as the day goes on. it would be nice if this stays the trend.

fingers crossed for you buddy

It was a succulent piece of mysis shrimp. I found myself having to defend her elegance from would be savages. A merciless tang, savage trigger and a relentless six line all wanted to take what was rightfully hers.

For what seemed like eternity (a solid 15 minutes at least) I tirelessly guarded her while she ever so elegantly drew the mysis closer and closer to her mouth seeking nourishment.

When the moment was over I pondered. I wondered how in the heck am I going to continue to feed this high maintenance coral? Because this 15 minutes stuff is gonna get old quick.

I might have to make a cage for it to protect it durring feeding. I think I have some scrap egg crate laying around.

She's 2 days in the light now. Early update for Joe since he asked in another thread. Tommorow will be a full week in the system.

At this point, each day I come home the elegance looks a little bit fuller and more expanded than the day before. Even the tentacles appear to be filling out a little bit. But I don't want to get too excited just yet. Still has a long road ahead.

This is her at this moment in time.

I decided to take Joe's advice and make a feeding apparatus for it. I fed it last night and it was able to catch and retain about 7-8 pieces of mysis. The tang is already trying to figure out a way to breach the defenses.

The elegance has taken a bit of a down turn. Could just be a faze or could be the sign of something worse.

It looked great a few days ago. Then I noticed it was closing up and began pooping the other night out almost all of its mouths simultaneous.

My understanding is that it could be poop or it could be expelling zooxanthellea. The substance was dark brown and pretty solid so I'm leaning towards poo. No doubt from all of the recent food.

But it still hasn't opened back up full and I did notice some excess mucus coming off of it so I decided to give it a dip yesterday. Looks a little better today but not fully open yet.

Fingers crossed for you my friend FWIW

I reached out to a fellow hobbyist who has elegance in his tank for quite some time. His thoughts are you may not have enough nitrates in your tank.

Too much circulation and light

The coral is not fed correctly.

You could have chemical warfare going on.
Last edited: Nov 14, 2016

So far I feel pretty confident on a couple of things.

1. I believe my purple tipped elegance is of the deep water variety. Most likely from Indonesia and not Australia. In fact I think true Australian elegance corals are more rare in the industry. I don't think it's a true aqua cultured specimen either. May have been observed at a facility for a period of time but doubtful it was propagated there.

2. I can already tell it doesn't like much flow. Another indicator it's not from shallow water. I do believe they have the ability to adapt but over a much longer period of time than other corals. Same with the lights.

After the dip I had moved it back to the shade and it's protected low flow area between the rocks. It's looking better today as the day goes on. Even better now since my earlier post.

The jury is still out for me on the higher nutrient theory. Just not sure that LPS is known to utilize nutrient from the water column in that way. Or if they get it from consuming actual food? Some claim they do better in clean water but the key is to feed them. Others say they don't.

How is it going

Still touch and go ever since the pooping episode. Looked better last night than it has all week but still not what it was a week ago.

Decided to bury the base in the sand a little bit. Gonna leave it alone for a while and just see what happens.

Edit: I'm happy to say that everything else in the tank is doing excellent. Chalice frags, Duncan, zoas, mushroom all growing and fully expanded.
Last edited: Nov 18, 2016

It was not meant for me to sustain such a beautiful creature. The endless hours of Internet research, selective choosing and doting affection were not enough to save her.

That's 2 down and I don't know if I have the heart to fail another.