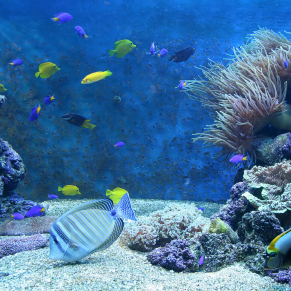 here's what's been done so far, i'll post pics later today:
I had a 55g that was up and running for a year or so, but never had anything in it but a little bit of LR. I finally put in 2 clowns and then started posting on SWF. I realized that 55g wasnt going to be big enough for me, so i figured i'd upgrade before spending dough on the 55g. so i ordered a 125 AGA, with a perfecto stand. to expidite the process, i emptied the water from the 55DT into a spare 55 i had a baby alligator in before. i moved all the LR i had and the few hermits and fish into that tank. i kept all the sand in the old 55DT and added 60 more lbs. i filled it up and stirred the sand bed up daily for 3 days to release any detritus, ammonia, trites, trates, that may have settled in the sand. while i was waiting for the 125g to come to the LFS (it was on back-order from the manufacturer) i got a bunch of beautiful LR from a fellow SWF.com member, along with a blue hippo tang and chromis. it was a long drive home, and the tang was on her way out when we got here after spending 3+ hrs in a bucket. i put all the new LR in the tank w/ sand in case there was a cycle, which there was. the tang and chromis made it through the ordeal just fine. i'll update later with everything i did throughout the day, and post pics.

today has been a game of hurry up and wait. i removed all the water from last nights test to see if the tank was water-tight. i filled it and put all the new LR and sand in it. i piled the sand on the front half of the tank so when the water clears i can stack all the LR and move the sand to the back of the tank. i took the heater out of the 55 that has all my livestock in it and put it in the 125, to allow the new tank to heat up, and the 55's temp to drop a bit. i also took all the LR out of the bare-bottom 55, and put it in a bucket with saltwater, so i can add it when i aquascape. i'm now just waiting for the sand cloud to die down to stack the rock. the water is actually pretty clear, considering all the agitation to the sand.

the water in my tank finally cleared up enough to see the back in order to aquascape. as soon as i moved the first 2 rocks: poof! i did as much as i could by feeling around, braile style, so when the water clears in the a.m. i'll leave you some pics and see what you guys think.