Well boys and girls this Saturday I'm buying back my 72g tank and stand that I custom built a couple of years ago. I haven't seen it since I sold it so I'm wondering what shape it's in and how much work I'm going to have to put into it to get it back in shape. Here's what it looked like before I sold it. Hopefully there's not too much damage control to do. 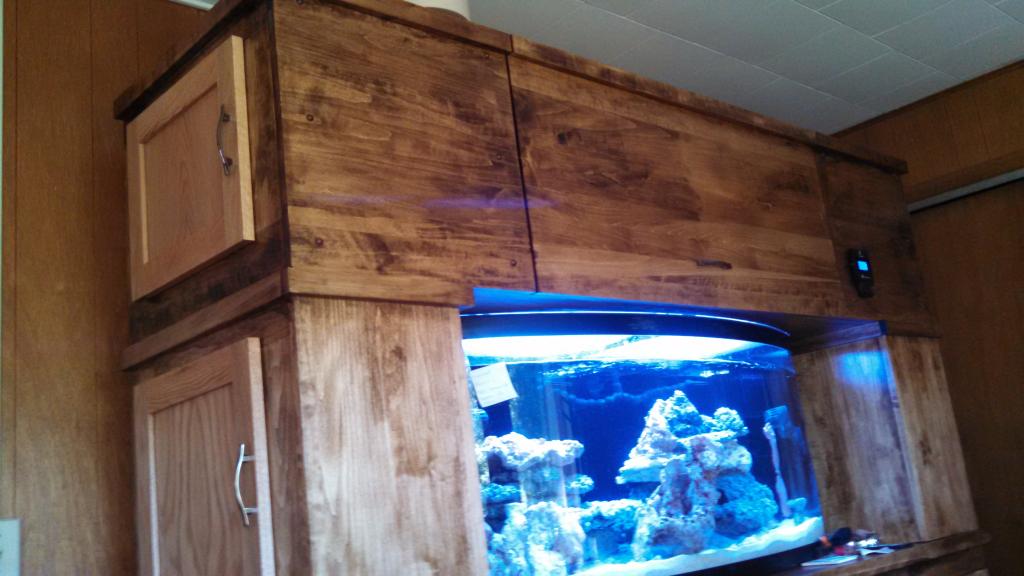 I'll post pictures of it as soon as I see it.

I went to the guys house that bought my tank and stand and I'll tell you I was nervous as all hell. It's been over two years since I've laid eyes on it was like seeing your child for the first time after two years. Plus, I had no idea how well he had taken care of it since he just put it in his garage and let it sit for two years or what equipment I had to replace since I forgot what I had sold outright and what I included with the sale of the tank.

Imagine my surprise when I walked into his garage and saw this: 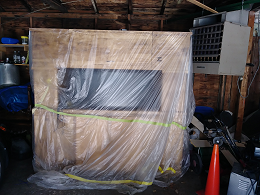 Wow! It's in the same condition it was when I sold it! With all the plumbing intact! Aside from dust on the stand and some minor rust on the vents in the back but those are easily replaceable but otherwise it's in perfect shape.

Then I started taking inventory on the equipment I gave him. What I found totally blew me away: 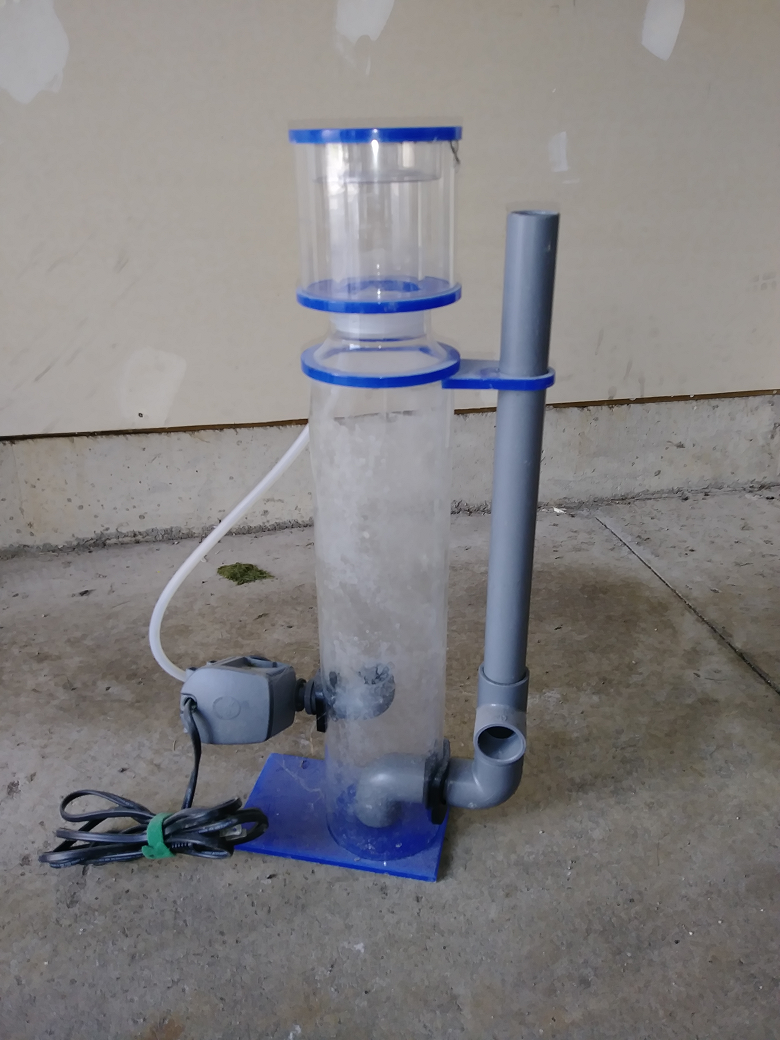 My reefoctopus BH100SS HOB protein skimmer that I bought for my old 36g tank. I'll use this for my 10g QT since all my HOB filters are gone. My 40g sump/fuge which in all my excitement I forgot to take a picture of. Ooops.

My ATO system, red sea test kits which are probably expired, my mag float, my 10g QT tank and three small power heads that I used for mixing saltwater. Plus some misc equipment that I thought was long gone. 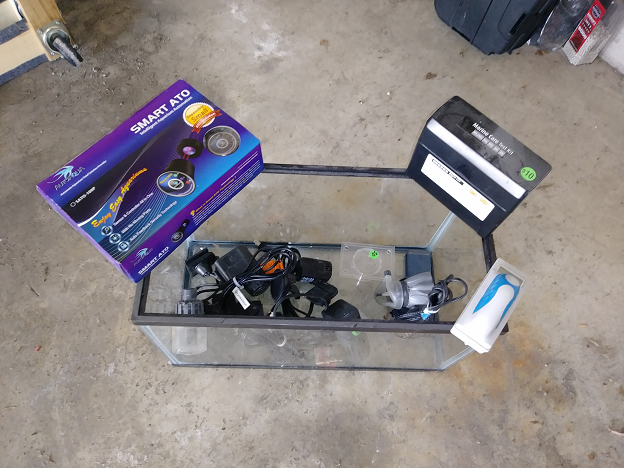 Now everything is in it's new temporary home in my girlfriend Elena's parents garage for the next 6-8 months till we get a house. 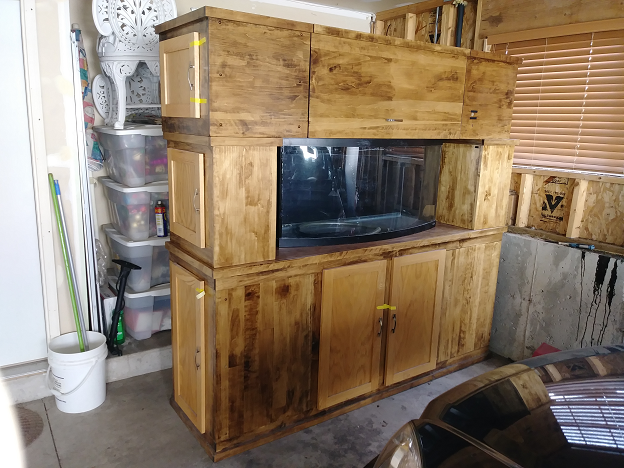 All I really need to replace is the return pump, all the lighting which will be LED again, the test kits and get larger power heads for the tank. Not too shabby considering I thought I had to replace everything. Oh, and build a new up flow algae scrubber.
I'll keep you updated as I make progress. Till then: Let the work begin!
Last edited: Sep 17, 2017

Hey everybody! Quick update:
I found an awesome buy on Facebooks Market Place. Six pieces of dead coral. A steal at $25. Couldn't pass this up. I included a soda can for size reference. 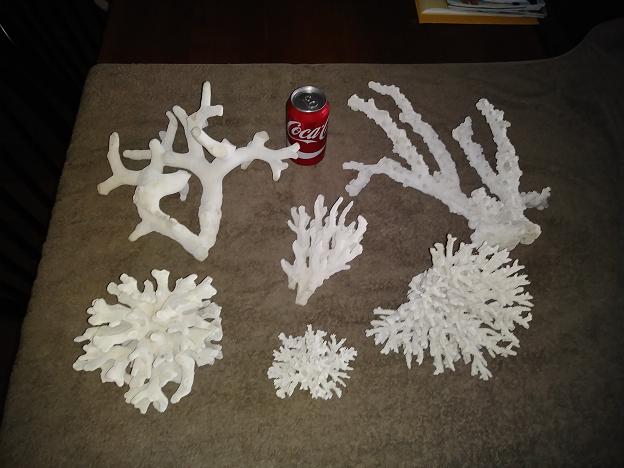 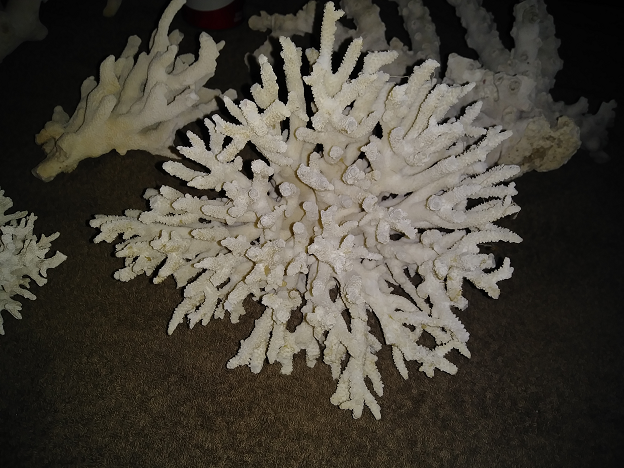 I think this is a stony coral, I'm not too sure. Maybe somebody here knows. 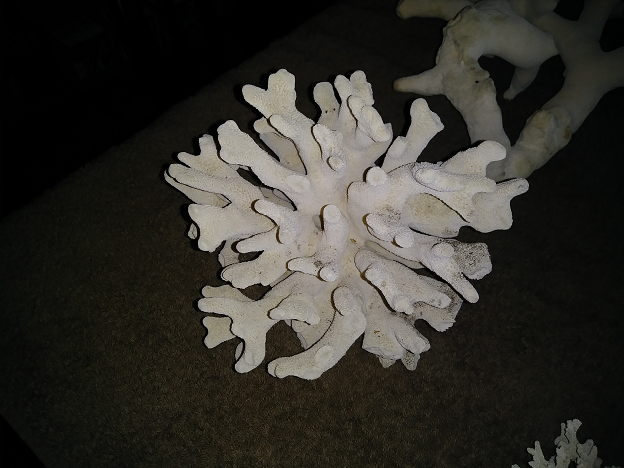 This looks like Elk Horn. Again I'm not sure. Anybody know this one? 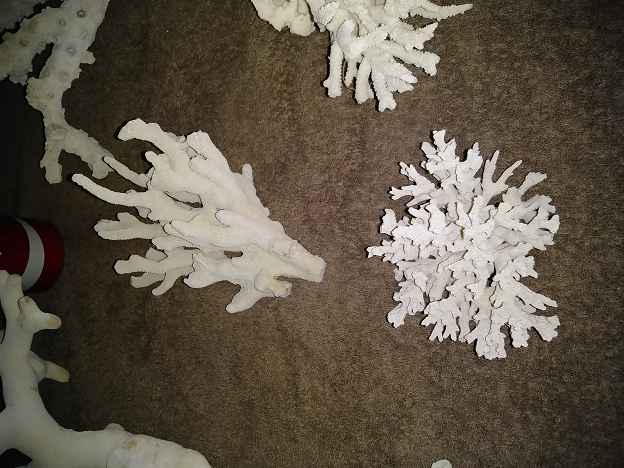 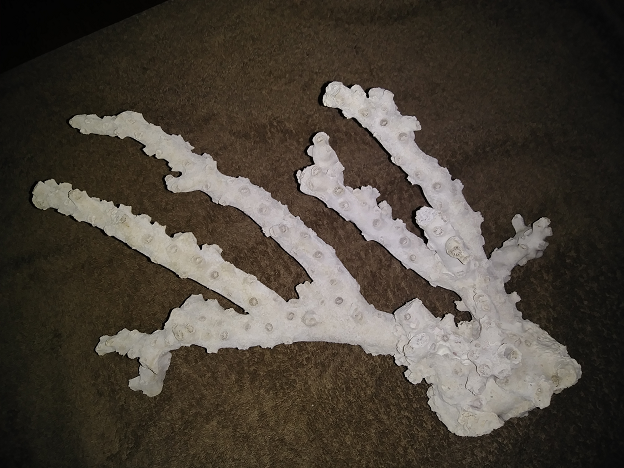 Definitely a stony coral. I'm gonna have to research this one. 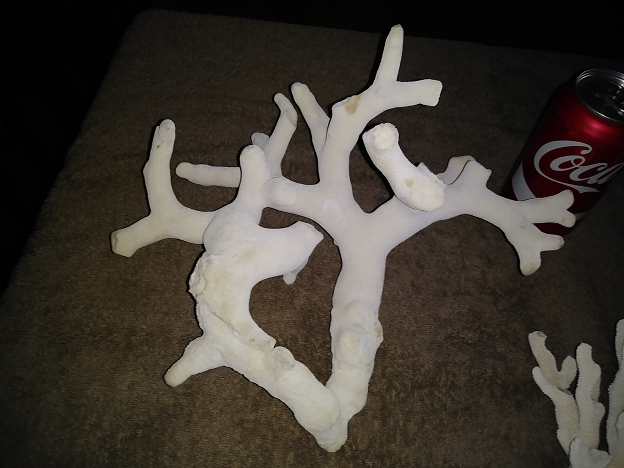 This one I'm 90% sure is an Elk Horn coral. Anyone disagree let me know.

All in all, I think these pieces will make a wonderful addition to my display once I set it up.
What do all of you think?

Staff member
I had a 72 bow too once upon a time. Had to give it up when I moved. Yours looks to be in good shape. You're not going reef?

It's in awesome shape. Just dirty and dusty. A lot of cleaning to do before I can do anything else.
I'm going to do what I did last time. Just a few corals, a couple of fish, but mostly inverts. I love inverts.
Last edited: Aug 27, 2017

Staff member
I love inverts too. I actually like nass snails. They would rise like the dead out of the DSB everytime I dropped food in the tank. The food didn't even have to hit the sandbed before they were up and ready.

Ok everyone. Here's the next update:
I found another awesome deal on dry corals that I couldn't pass up. This one is better than the last. Eleven pieces altogether. $80 for everything and some of the pieces are huge! This is the whole group together. Again, a coke can for reference. This is going to be the center piece of the tank. This baby measures 21in wide and 17in tall. This monster measures 14in wide by 11in high and 11in thick front to back. This photo does it absolutely no justice. This one still had the heat shrink wrap on it. A beautiful specimen. This puppy looks like an Elk Horn and measures 12in wide by 8in across and it's 7in thick, front to back. Another nice piece. This one also had the heat shrink wrap still on it. This one is bigger than most of the ones I got from the last purchase. 9in wide by 10in wide and is 7in front to back. Here's a group of the smaller corals. Not too shabby. Two large groups of barnacles. Does anyone think these will make a nice addition to the display? As I was getting ready to leave the guy came running out of his house and gave me this last piece. A Sea Fan skeleton. This amazing piece measures 24in wide by 21in tall.
I'm not going to put this one in the display. Instead, I'm going to mount it in a shadowbox frame with a photo of a live Sea Fan that I pull off the internet. I can't believe he just gave this one to me!

Here's photos of both groups of dry coral: A total of 17 pieces altogether. Each one deserves a place in the tank. I don't know if I'll be able to fit all 17 in the display but I'm sure as hell gonna try. If I can arrange them right it should provide plenty of hiding places and swim throughs for all my critters.
I decided that I'm not going to do any DIY rock like I did the first time I set the tank up. What I might do though is make a DIY base rock like I did the first time just to keep all these pieces above the substrate.

Here's a photo of the DIY rock that I had before: The piece that I'm talking about is the long one on the bottom of the pile of DIY rock that I made last time.

Here's an example of what I was thinking about for the Sea Fan skeleton:

And then inserting this photo in one of the corners of the frame for reference: I don't think it's a bad idea. What do you think?

I just wish these things weren't so damned hard to keep. I wouldn't mind putting a live one in the display.
Last edited: Sep 9, 2017

The 10g I'll keep with the 10g I already have and use them both for QT's. The 45g fits perfect in the base for a sump but it's too tall to reach in and do any real work on it. So what I was thinking about doing was take it apart and cutting the side glass up for partitions and turning the 30g long into a new sump for the base. The 55g tall I'll just sell to recover some of the $50 I spent on the tanks. I only plan to have the one display so I really don't need to keep it. I've done glass cutting and drilling before (I drilled the display for the over flows and the return. I practiced on an old 75g and turned it into Swiss cheese.) so I feel pretty confident. I just need to come up with a design.

The acrylic sump I have isn't the one I used in the original build (I sold the original one. What an idiot. If I knew that I was going to get my tank back I wouldn't have sold the sump.). Anyway, I can't trust the old sump I have now to not leak or crack because of it's age so I'm going to cut it up and use it to hold filter socks for the new glass sump. The rest? Well, just build shit with it. I might need some of it to raise the skimmer. I guess it just depends on how much water will go in the sump. I need to make sure I leave enough room for overflow from the display when I shut it down for feeding, maintenance and possible power outage.

Then I'm going to buy a 4x4 sheet of black acrylic and use that to make another up flow algae scrubber. Can't decide how thick to get it. I could just get a 2x4 sheet but in the long run, I'd rather have too much than not enough. The one I had before worked great for keeping nuisance algae out of the display. I'd be crazy not to build another one. Just don't know if I should use standard LED's or use red actinic LED's.

All and all, this new setup won't be bigger but it sure will be better.

BTW: I took all my equipment apart (Skimmers, pumps, etc), put everything in one of my 10g tanks and gave it a bath in vinegar and water with running power heads. Then I gave everything a bath in fresh water with power heads running. Next I let it all dry, reassembled everything, then seal packed everything to keep it clean and now it's stored till I need it for the rebuild.

I also bought several books, nine in fact, to refresh my knowledge. Books about algae, water chemistry, corals, inverts and so on. Written by auther's such as: John Tullock, Julian Sprung and Martin Moe to name a few. I guess I've got plenty of reading to do for the next few months. And I'll have plenty of questions to ask here too.

Your back with a vengeance lol well done sir

jay0705 said:
Your back with a vengeance lol well done sir
Click to expand...

Thanks jay. This is going to be an awesome rebuild. Just need to start getting missing equipment together. Heaters, power heads, return pump, LED lights and misc. tools and equipment. Before I know it, we'll have the house and a place to set up the tank. Yeah Buddy!!

Edit: While doing some research, I realise that these are Staghorn corals. Not Elkhorn corals. Hey, I was close. Just had a thought. Since the coral pieces have been out of the water for some time now, I'm thinking that I should soak them in salt water for a couple of days to allow any air trapped in the core of the skeletons to dissipate and make sure that they are at "true weight" to avoid any collapses in the tank.

Come on everyone. Give me your opinions or thoughts so far. If for no other reason than to let me know that some ones reading this.

how do you keep all those clean in the tank? I would assume after a while they would get algae build up on them and no longer be white.