Saga of the Raccoon Butterfly in a Reef Tank 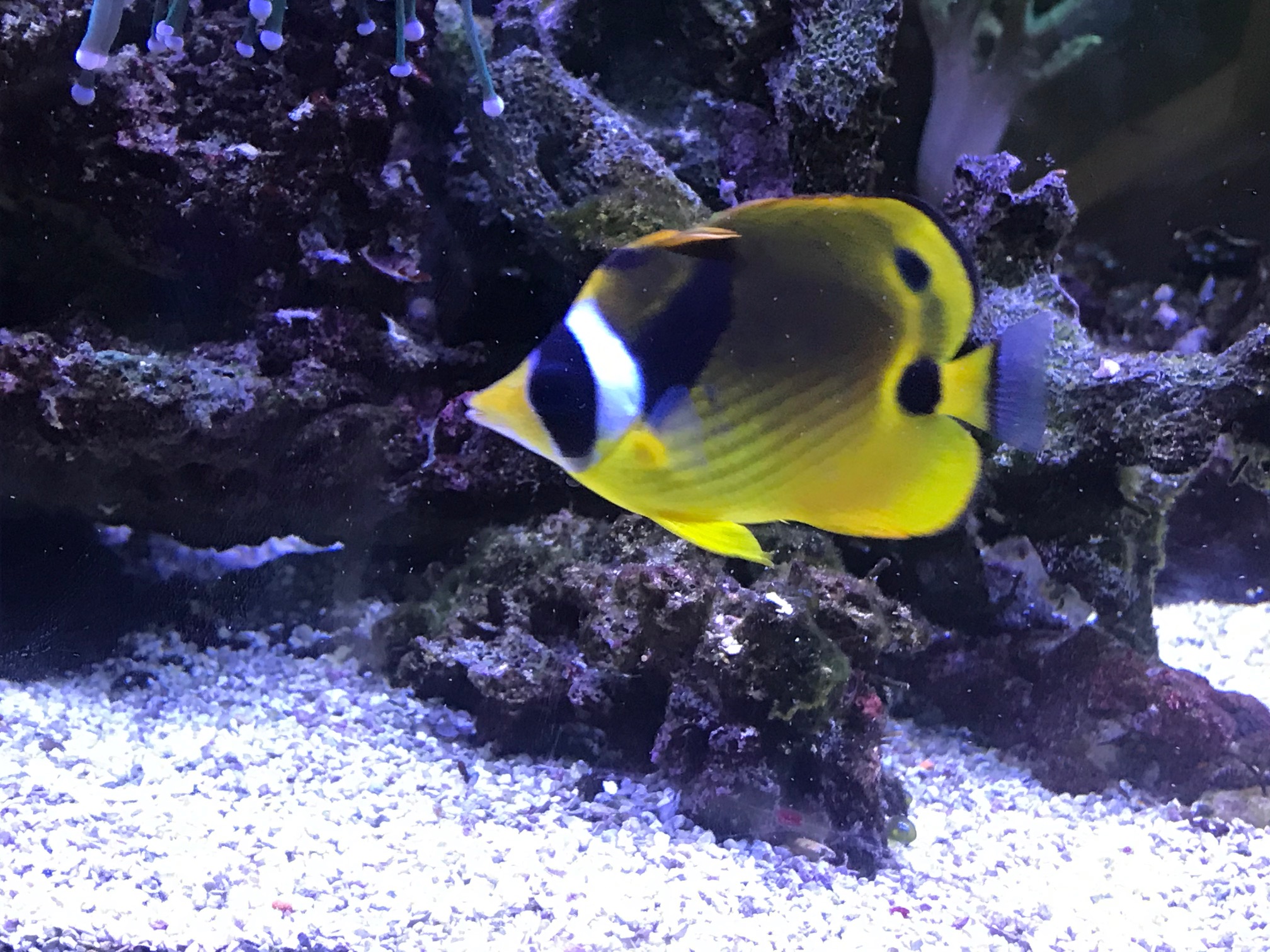 It all started with our utter frustration after 4 + years of battling Aiptasia. Nasty Aiptasia, that seems to sneak in every time a new coral comes in. The RedSea chemical only set them back a few weeks & then voila - they were back. So, more research. Hmm, Raccoon Butterfly Fish actually eat the stuff, once they are introduced to it. Sold!!! Found a nice healthy Raccoon at our favorite shop & home we went. There were a number of Aiptasia in the overflow section so we popped Mr. Raccoon in there so he could discover his fondness & feed off them. Separated from the rest of the tank it was essentially Aiptasia or be very hungry. He chose the Aiptasia & within about a week they were gone. We were already quite smitten with him & now he'd exceeded expectations. Carefully netted him & introduced him to the rest of the tank. He was pretty darn happy with all that room, more Aiptasia to eat & even the rest of the fish were not that harsh on him. Our research & observation taught us that he is indeed a voracious carnivore. Will not touch the pellets of seaweed etc the other fish love so much. Essentially it's meat or nothing. So we slightly increased the frozen brine, mysis, etc we fed the tank on in the evening to ensure he received sufficient food. He was growing, looking really good & full of energy.
Among our corals were two nice, healthy clumps of Hammer on the left reef of our tank. We weren't paying enough attention but when one morning we noticed the one clump totally gone & checked for the other one only to find it also gone we were initially mystified. A few days later yet another coral just disappeared over night - what the heck? Then the morning came when our entire patch of GPS didn't awaken with the day, only the purple corpse remained. Mr. Raccoon had literally been eating his way through our corals! We reached out to folk at our wits end because by this time we really, really enjoyed him for himself, but we also enjoy our corals.
The ONLY solution we were offered was a flat - get rid of him. "Once a Raccoon starts eating your corals you can either say farewell to having corals in your tank or get rid of him. "
Well, that didn't sit well so we decided to try something. Thanks to Covid, we're home all the time & have nothing but time. Mr Raccoon was going after our Kenya tree & our Gorgonian by this time. Spent literally hours just sitting by the them & scaring Mr. Racoon away from them every time he even went near, let alone tried to take a nip. After about a week, our Tang seemed to get into the spirit of things & would literally chase Mr. Raccoon away from the those corals. At the same time, observation noted he was seriously into feeding both in the pre-dawn our lighting provided & again in the moonlight. We therefore made feeding adjustments & gave him a protein snack in the moonlight & again in the pre-dawn. All the other fish, except the clowns are asleep at that time so Mr. Raccoon has a belly filling nibble & is much more agreeable about leaving the Kenya Tree & Gorgonian alone. He has shown that he can be trained, which is huge but it does take a lot of time & patience. He is now testing us with the Toadstool & so we are doing the same thing along with the reinforcement from the Tang. It's day 2 of his attention to the Toadstool & he is now able to swim past it without undue interest about 75% of the time. I suspect we will have to go through training with each and every coral.

I wanted to share this saga if there are others out there struggling with the same issues. If you have the time & patience they can indeed be trained to leave your corals alone & they are a truly delightful fish. Once we have trained him from all the corals currently in our tank we plan to begin replacing the eaten ones & then carefully train him from each one.

Ha ha ha, very intresting read. Butterflies are generally not reef safe. They especially love hammers and frog spawn. Mine don't touch my zoas tho. The one exception is the copper banded. They are reef safe and also eat apatasia

Staff member
I think the butterflies with the long snouts like CB are more reef safe as a whole.

Agreed. It doesn't seem to matter if they are well fed either. They just have a taste for them. My bf is captive bred too!! Still went rt after a hammer i put in.

Staff member
That Bfly and I would be fisht fighting lol. Great story!

jay0705 said:
Ha ha ha, very intresting read. Butterflies are generally not reef safe. They especially love hammers and frog spawn. Mine don't touch my zoas tho. The one exception is the copper banded. They are reef safe and also eat apatasia
Click to expand...

Hi there & glad you enjoyed our saga. We did try the Copper Band solution before the Raccoon. The rest of our tank not only took offense to his presence but he just wouldn't eat anything not even the Aipasia & died. True confessions, we tried twice & then didn't want to be the cause of any more Copper death.

jay0705 said:
Agreed. It doesn't seem to matter if they are well fed either. They just have a taste for them. My bf is captive bred too!! Still went rt after a hammer i put in.
Click to expand...

It is seeming to make a positive difference to give him those wee protein snacks at dawn & late moonlight. He has a high metabolism & settles right down afterwards.
Still a work in progress as now & then he'll sneak a wee nip. Our Tang though will then get between him & his nip target & lightly tail correct him.
So far he's leaving the Torch alone.
Fingers are crossed as it appears to be working

Excellent. That is the one issue with copper banded butterflies, they can be tough to acclimate. My captive bred milletseed is my first try with them. Excellent fish, just a fondness for hammers.

We really miss our Hammers. I am going to sneak one in and then be ready to watch Mr. Raccoon like a hawk to nip any nibbling in the bud. He's still dong really well - we haven't lost any more corals and he's not even gone for the Torch. If I am busy and not watching for an aftrernoon though he will sneak a nip from the Kenyua tree.. The Kenya tree gives him away though by curiling in on itself. So far so good

Sorry for the lag - yes - update: Mr Raccoon has shown that with his dietary needs met & the infrequent reminder to not eat the corals he can behave. We have not list any more since I started the regime & training. What is hilarious though is our Tang. The Tang has been almost 6 years in the tank & while at first he gave the Raccoon a bit of a cold shoulder, that's not the case now. They shadow each other pretty much all the time & the Tang police's the Raccoon away from all the corals. It's the strangest thing! If the Raccoon is a bit close to a coral, the Tang puts himself in between and tail whacks the Raccoon. We introduced new coral the other day & so far so good. Then If test will be when we replace the Hammertoe
You must log in or register to reply here.
Share:
Facebook Twitter Reddit Pinterest Tumblr WhatsApp Email Link
Top