pegasus said:
Geisman bulbs are (or were) designed specifically for dimmable fixtures. Since my fixture isn't dimmable, it was a coin toss decision between ATI and Geisman bulbs. ATI won the toss. I may go with Geisman when it's time to change them out, as they're a little cheaper.

If you are using D-D Geisman bulbs, I hope you're aware that D-D and Geisman are no longer working together. D-D is the company that developed the special phosphors that Geisman uses in their bulbs, and the development for use in dimmable fixtures. They will continue making these bulbs, but it will be under their own brand. You can read about it here: http://www.advancedaquarist.com/blog/d-d-issues-statement-clarifying-the-recent-giesemann-powerchrome-t5-announcement
Click to expand...

Wow. Thank you for that info.

snakeblitz33 said:
I would li think that we are the same kind of people here in the US. However, since this is a national forum, our members are spread out over the entire US. I only know of two people who are even remotely close to Louisiana - where I live. Even then, it's about a 10 hour drive to people who are pretty close to me that I know on here. My state has a forum for people, but I am not a member of those forums for various reasons.
Click to expand...

Oh this is a national forum too. I am a. 4 hour flight from this person. They are from all over the country. That's what I was saying. 99% of these people have never met this person & boy did they dig deep. Amazing people us reefers.

LOL... I don't think anyone would do that for me unless I was dying and they wanted to lay claim to my equipment/coral.

This was the way we presented it to her. We created a profile for Samta who wrote her a poem. Didn't want to hurt her pride so made it funny not heavy Enjoy. Twas eight-weeks after Christmas, and all through the house,
Not a creature was stirring, except my wife's mouse.
My good friend @@Sam Parker, he gave me a ring,
He said "God damn it Santa, I've but only bad news to bring".
He told me of this post, in which his friend was in shit,
I said "Sam, don't move, I'll be there in a bit".

We went out for breakfast, and whilst eating my bagel,
He jingled my balls, from under the table.
But after he settled, he announced his idea,
He said "Fuck! I know Santa!, we'll bring her some cheer!"

It came to my mind, that you had been good,
Sam then decided, to do what we could.
We spoke with the elves, we had a solution,
I would like to point out, it involved prostitution.

We then gathered and talked, and asked what's a winner?
It was decided that @@Grimz, would give you his skimmer.
But with your back being in pain, and installation being grim,
We decided it better, be installed by@@Jimsim.

The good folk they drank, and talked of more glory,
They all spoke, and twas not yet, the end of this story.
@holly gave salt, it's really hard to make rhymes,
But you'll get one bucket now, another two-months down the line.

But what of the others? The elves in the pack,
"We'll raise her some money, to fix up her back!"
They reached deep in their pockets, to give you some bucks,
They gave all that they had, without giving no fucks.
The elves wanted colours, in clear plastic bags,
So some elves gave money, and others gave frags.
They raised funds for you, over $1,000 to use,
"This gift is from us, your friends at The Fuge!"

Glad to be of service. I didn't want you to run out and buy Geisman bulbs only to get them and realize they don't illuminate your tank the way you're used to seeing it. Geisman doesn't have access to the special phosphor blends developed by D-D, nor can they be copied. Geisman will have to create their own phosphors.

snakeblitz33 said:
I would li think that we are the same kind of people here in the US. However, since this is a national forum, our members are spread out over the entire US. I only know of two people who are even remotely close to Louisiana - where I live. Even then, it's about a 10 hour drive to people who are pretty close to me that I know on here. My state has a forum for people, but I am not a member of those forums for various reasons.
Click to expand...

Its only a 4hr flight to ny buddy lol

This was a fascinating build! Impressive that you could switch everything over in a matter of 3 days! I am also wondering what happened to the other tank? Multiple tank syndrome?

kopczynski said:
This was a fascinating build! Impressive that you could switch everything over in a matter of 3 days! I am also wondering what happened to the other tank? Multiple tank syndrome?
Click to expand...

hi @kopczynski ., firstly thank you. hope you enjoyed it because we didn't lol !

WE did consider Multiple tanks, but in honesty this hobby is so expensive over here , we decided to put the $$ into one good tank rather than spread it around 2 tanks and maybe not be able to maintain to the level we like.

I have found your prices for things so much cheaper, we have kept a log of everything we have spent on this darn tank (and the other one) and between the two in corals alone we are topping just on the $4,500.00. thats not tank, stand, fish or rock or hardware just corals.
Your very lucky over there, I saw a ric pack advertised on this site for something like $80.00 free postage, 1 ric over here starts at $250.00. The largest red gonipora in our picture cost us $280.00. So multiple tanks not a great idea.

That was part of the pressure, the old tank had been sold, stand, sump and tank and had a pretty firm pick up date, I actually think the move was very slow indeed, we had originally thought "easy one day done "how wrong we were ! '
The scape is what threw us off schedule, trying to get both sides to look nice is virtually an impossible task, would look great one side, run around the other and shit awful - start again.

I honestly think this tank will be better once corals have grown out some, I am also really pleased that we made the decision that this tank is only and always will be natural sea water.
Every time we do a water change the corals respond, so much more than the artificial salt water. Think there is tons of goodies in the natural water that the corals use. I have noticed my parameters are staying a lot more level with less dosing too,

Thank your for enjoying our build, appreciate it a lot.

P.S @kopczynski
One think we hated about old tank was couldnt get to the back of it to clean because it had a coast to coast 6 foot internal overflow against the wall.
So other consideration on 2 tanks,.......yuk
WHO would want to cleant that.........new owner not me...lol 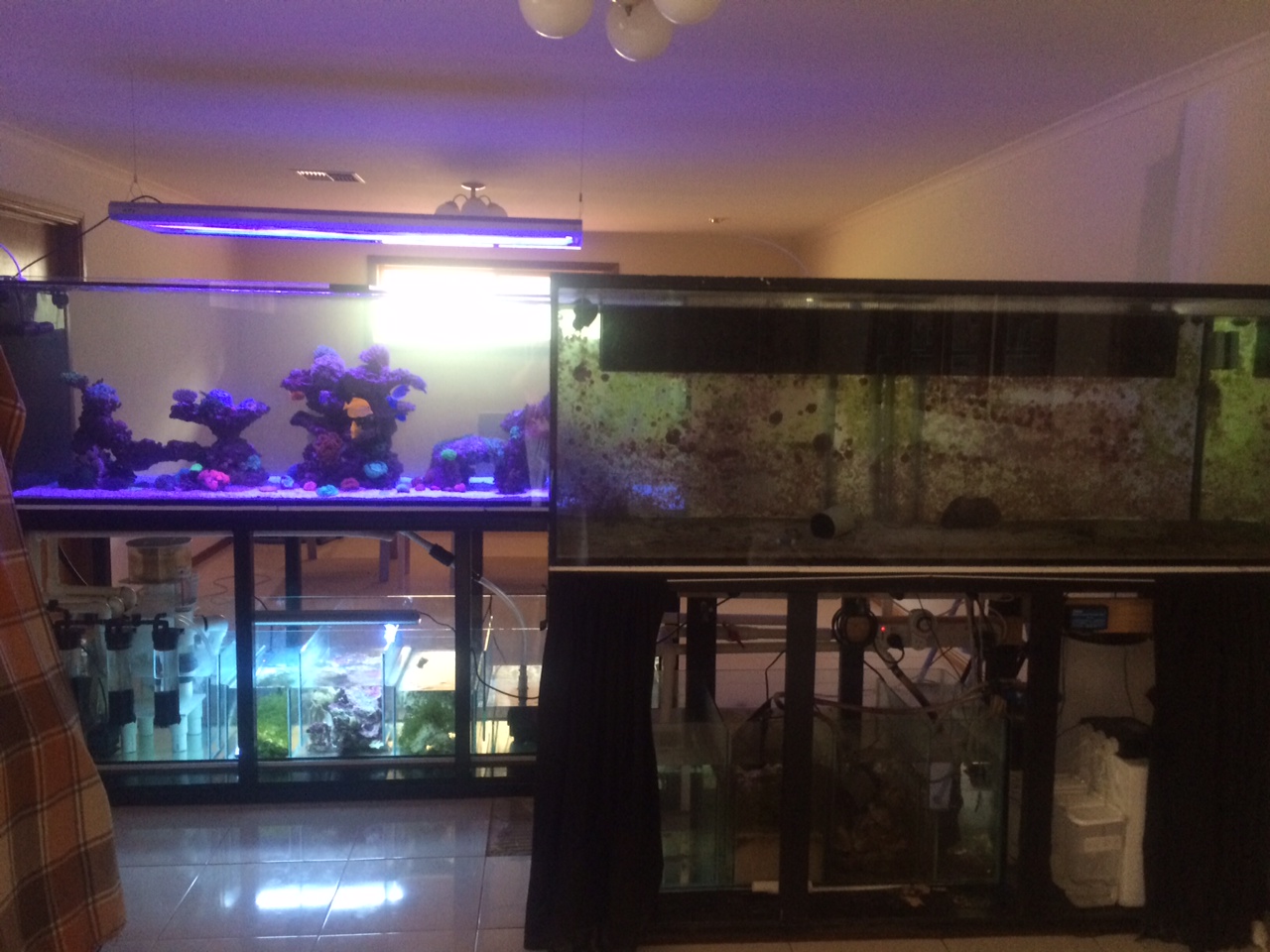 haha yeah I understand, makes sense in the long run. Keep us updated on what happens!

Your tank is awesome Mandy.

Now fly to Texas and bring some Aussie magic to my tank!

I am in awe. Amazing tank! I look forward to seeing more!

Thanks everyone for your lovely comments. I really appreciate it. As you can imagine it takes a lot of work and dedication, so its nice to have acknowledgement of it occasionally. thanks
I

Beautiful tank! You have a very streamlined and organized filtration system. Definitely a set up to aspire to.

insaneglitchx said:
Beautiful tank! You have a very streamlined and organized filtration system. Definitely a set up to aspire to.
Click to expand...

Thank You very much
I

Any updates? There have got to have been some changes over the past year.