I just picked up a bak pak 2 with a pre-skimmer from a buddy. Its my first skimmer so I'm kind of new to the whole wet/dry skimming. Anyone have some experience of the best way to tune this thing. I'm aware of moving the collection cup up and down to control it, but i'm nervous to go to sleep tonight in case it overflows. any tips are greatly appreciated. Thanks
Also, does the skim mate take out a lot of salt or is it similar to evaporation?

I have one....the skim mate takes nothing from the tank.....You also have to adjust the air line..you will have to play with it some. Position the cup so that the bottom of the cup...VERY BOTTOM....just barely sits below the water in the skimmer
If you are that worried don't run it overnight.....BUT you will tune it....wait a few hours....and then check it

how do i adjust the airline? And by placing the cup at the very bottom meaning it should be very high up on the unit?

Quote:
Originally Posted by dampkring9 http:///forum/thread/383260/bak-pak-tips#post_3350649
how do i adjust the airline? And by placing the cup at the very bottom meaning it should be very high up on the unit?
You adjust the airline by opening and closing the valve
The water level of the skimmer should only be about 1" max over the black pipe that is in that section.....when I say the bottom of the cup I mean the VERY bottom....the flat bottom part of the neck

Look at this picture (NOT MINE) 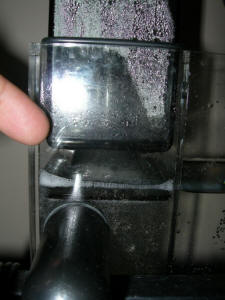 Ok makes sense thanks , another dumb question for you though. The valve would be located where? the little rubber piece that covers the air hose? I just don't see how that is adjustable..

...I can't find a bigger picture

Is that an aftermarket valve? Mine just seems to have a rubber piece that basically has two settings,if i take the cap off more air, or less air if i leave it on..doesn't seem to really adjust anything. I also have a ton of bubbles, would you recommend a bubble trap or should things settle down?

The top should twist......IDK what you got with yours....
let the skimemr break in, BUT you have to be able to adjust the air .....I had a bubble issue....the traps do not work..what you can do is turn the outflow pipe in the tank upwards just to the top of the water level, that will help break the bubbles up....worked for me

thank you for your prompt help, its greatly appreciated

Quote:
Originally Posted by dampkring9 http:///forum/thread/383260/bak-pak-tips#post_3350701
thank you for your prompt help, its greatly appreciated
No problem.....glad I could help cause now I am headed off to bed
good night

One more question, how did you manage to point that pipe upwards? seems to be sealed in place.

I have had a Bak-Pak skimmer/refugium combo, called the Aquafuge II PS, for about 3 1/2 months. I play around with the cup position; I currently have it about where Meow said to put it. The lower it is, the more "tea" (looks like green tea) it will capture. I empty the cup while morning coffee is brewing and again when I get home from work. Generally, there is about 1" of "tea" in it. Be sure to always smell it before emptying

The manual says if the air line is making too much noise, you can attach another piece to lengthen it. I bought some 1/4" airline and an airline valve for mine to length the line by a couple of feet. I used the airline valve to join the airline pieces and to serve as an additional adjustment. During normal operation, I have both valves full open. The airline hangs down behind the tank.
The thing is really noisey. When company is over or when I just don't want to hear it for a while, I will shut off both airline valves (the one I bought and the original one at the end of the line) and deprive the pump of air. At that point, I no longer have a skimmer, just a pump for flow through the fuge, but it makes the unit very quiet.

Quote:
Originally Posted by dampkring9 http:///forum/thread/383260/bak-pak-tips#post_3350718
One more question, how did you manage to point that pipe upwards? seems to be sealed in place.
It should not be sealed....the whole thing actually comes apart.....just turn the elbow

I'll have to try to turn it again when I get home. I felt like I could break it if I was turning any harder

Quote:
Originally Posted by dampkring9 http:///forum/thread/383260/bak-pak-tips#post_3350865
I'll have to try to turn it again when I get home. I felt like I could break it if I was turning any harder
Yuo say you bought it used? Make sure it has not been glued......There is a nut on the inside section of the skimmer that you may have to loosen

yes, but from a close friend. He didn't want it due to the noise. I dont think he made any mods but ill double check. Also, do you know if this whole lengthening of the air hose to reduce noise really works?

NOISE??? Mine makes no noise, I am not sure what you mean by lengthening the airline though???
Where does the noise come from?

The manual talks about the noise coming from the end of the airline, which in my case, isn't too much. It sounds like a gurgle, or maybe like a straw trying to get that last little bit of milkshake from the bottom of the cup.
Most of the noise comes from the pump itself. Originally it had the RIO 600RV; I changed it out for the newer Accela pump (which is much better), hoping for a reduction in the noise. The new pump is still loud, but at a slightly lower pitch. Only when I turn off the air is the pump quiet.
Yours makes no noise?!? What pump are you using?

Well mine came with the Accella, but I broke it....LOL...so right now I have a modded maxi-jet....I ordered a new Accella, but since it is working fine with the MJ, I have not bothered to change it out
The pump has never made noise.....YAYY...LOL.....I did have bubble issues though
You must log in or register to reply here.
Share:
Facebook Twitter Reddit Pinterest Tumblr WhatsApp Email Link
Top