ooooo I like those options Pegasus. Great choices - I'm going to look into those for my tank.

I'll have to give it some thought and research.

Tangs either nip at soft and/or stony corals or they can nip at Tridacnid mantles (Which is at the top of my wish list) or are ick magnets. Too many cons and not enough pros. Oh well, any more ideas?

silverado61 said:
Tangs either nip at soft and/or stony corals or they can nip at Tridacnid mantles (Which is at the top of my wish list) or are ick magnets. Too many cons and not enough pros. Oh well, any more ideas?
Click to expand...

My yellow Hawaiian doesn't bother any of my corals. Pygmy angels are more likely to pick at coral polyps and clam mantles. Just saying...

I never had issues with my yellow tang or fox faces ever nipping at corals or clams... I might be adding both to my tank before long.

To each his own

snakeblitz33 said:
I never had issues with my yellow tang or fox faces ever nipping at corals or clams... I might be adding both to my tank before long.

+1. As long as they're well fed, they usually won't bother any corals or clam mantles...

My foxface will nip at corals and eat zoanthids, occationally. It also picked at my feather dusters tube. After while it stops and lost interest. Each specimine is different. I have never heard if tangs picking at corals or clam mantles. I'm interested in adding a clam to my tank, I hope my tangs and foxface don't nip at it.

Tangs can kinda b a hassle imo as well.
Currently I have a 4-5" Scopus tang and a half black mimic. Small.

Just picked up my reef lobster yesterday. They had it in a holding tank with a rock to give it a place to feel safe. Well, the little booger found a hole in the rock and dug himself in. No matter what amount of coaxing they tried he wouldn't come out. When they grabbed a fish net and started to poke at it with the handle I put a stop to it. Asked them how much for the rock and they said since he wouldn't leave the rock they were just going to give the rock to me. So they triple bagged it, I put it in my Styrofoam shipping box and off we went. After 3hrs of acclimating I put the rock and lobster in the tank and wouldn't you know it, he jumped right out of the rock and darted off to find a new cave to call home. He's about 2in long with purple and red coloring. Just a beautiful animal. I fed the tank today and he came right out, grabbed some food and went right back in his cave. Next is going to be a feather duster or two and a tridacnid. Just don't know which kind yet. Research.

I'll have to try feeding with one hand, snapping a picture with the other. I just hope I don't take a picture with fish food and feed my camera to the tank.

You want pics? Well, I finally got "Proof Of Life". I've actually taken several pictures with my $1,000 camera the wife and bought for our upcoming Hawaii trip but with the auto focus they all came out either blurry or didn't snap the picture before he darted back in his hidey hole. This one I got with my phone. It was a pain in the wazzo to transfer to the computer but here he is. 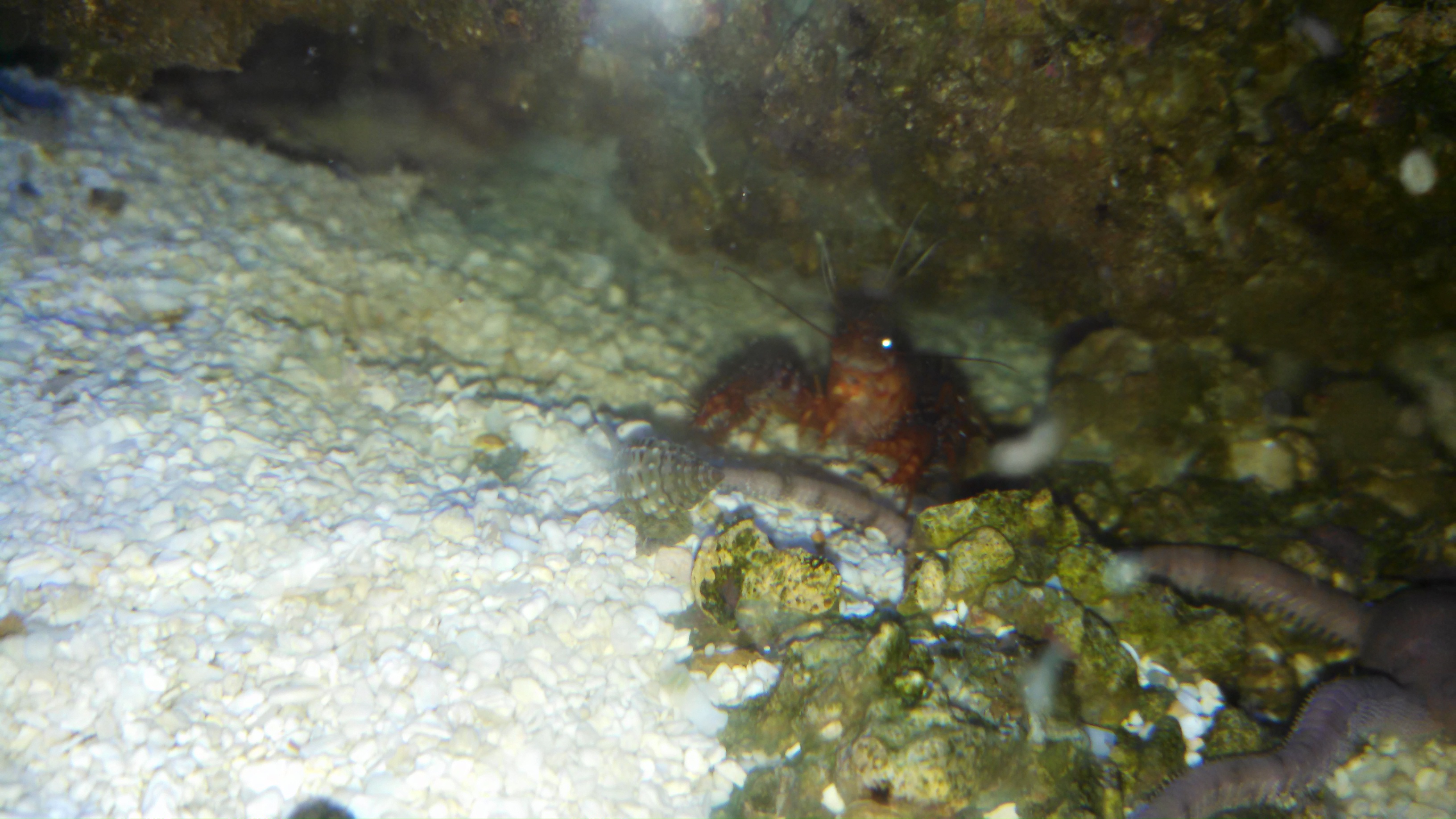 He's about an 1-1/2 inches long not including the pincers and has already molted once that I know of. By the time he's full grown he's supposed to get about 4-6 inches without the pincers. Every time I feed the tank he gets more and more bold and comes out a little farther and stays out just a little longer. I'm hoping he finally moves to one of the caves I have built in the rock work so I can see him better when ever I want. Time will tell I guess.

I can't believe it's been almost 2-1/2 years since I posted that last picture of the lobster. Since then I tore the tank down and sold everything then moved to Hawaii for a year to get away and start a new life. Divorce is such a bitch. It turns your whole life upside down. Well, if you can believe it, I met the new love of my life Elena, got tired of Hawaii, and moved back to my home town of Waukegan, IL. I've been back for over a year now. I'm still with Elena so I guess we're a match. We're planning on buying a house in 6-8 months.

I've got the itch to get back into saltwater. Any time I talk about saltwater with anyone I think about my 72g tank and stand and wish I had never given it up but guess what? The guy I sold it to still has it. After he bought it wouldn't fit where he wanted it. To tall, go figure. So he put it in his garage, covered it up and it's been sitting there ever since.

Guess what? He said I could buy it back for the same price that I sold it to him for! Freaking awesome!! So I'm going to sell my vape smoking kit, which I don't use anymore since I moved back here and use that money to buy back my tank and stand. I plan on putting it in Elena's parents garage till we get the house. Until then I'm going to take inventory of everything I've got, clean it up and start getting the missing equipment that I sold separate from the tank. The day we buy a house the tank and stand will probably be one of the first things I move into it. I'll set it up, test it for leaks and power it up.

So stay tuned. In the near future I'll be starting a new thread titled, " The rebuild of my 72g tank and stand ". I'm getting excited just thinking about it so stay with me guys and gals and keep an eye out for my new thread.

Until then it's good to be back and I'll be doing a lot of reading here to see what everyone's been up to. Not to mention a lot of research to see what's changed in the world of saltwater tanks.

(Sigh) Did I mention it's good to be back?